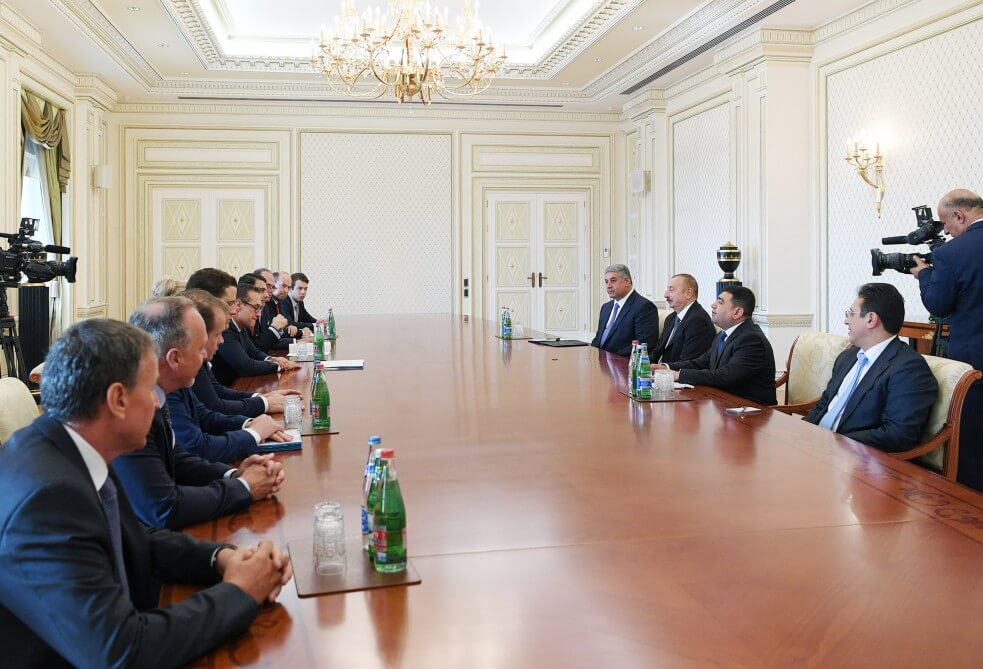 President of the Republic of Azerbaijan Ilham Aliyev has received a delegation led by Vice-Chancellor of the Republic of Austria Heinz-Christian Strache. The head of state hailed a good level of bilateral relations between Azerbaijan and Austria. He recalled the former Austrian President Heinz Fischer’s visit to Azerbaijan as well as his official trip to Austria. Saying Azerbaijan and Austria enjoy very good economic cooperation, President Ilham Aliyev pointed out numerous Austrian companies’ long-term successful operation in Azerbaijan. Expressing his confidence that Austrian Vice-Chancellor Heinz-Christian Strache’s visit to Azerbaijan with a large delegation will be a good opportunity to familiarize themselves with the country, the head of state said the talks on cooperation in sports, tourism and other fields will contribute to the development of bilateral relations between the two countries.
Heinz-Christian Strache extended Austrian Chancellor Sebastian Kurz’s greetings to the head of state. Heinz-Christian Strache noted that his visit to Azerbaijan with a large delegation mainly aims to further deepen Azerbaijan-Austria bilateral ties, which he described as good, and to contribute to these issues based on the good traditions of bilateral relations. He hailed the importance of contacts between the two countries’ officials in terms of the development of bilateral relationship. The Austrian vice-chancellor proposed to set up a council and hold its regular meetings in order to deepen cooperation between the two countries in economic and other fields, to discuss strategically important issues and implement specific joint projects. He also expressed Austria’s keenness to attract investments from the EU to Azerbaijan, bring Austrian technology to the country and export the products manufactured here. Heinz-Christian Strache also pointed out that Austria is interested in bringing Azerbaijani companies to the country, and underlined Austria’s readiness to support Azerbaijan in delivering its products to the European Union markets.
The head of state thanked for Sebastian Kurz’s greetings and asked the Vice-Chancellor to extend his greetings to the Austrian Federal Chancellor.