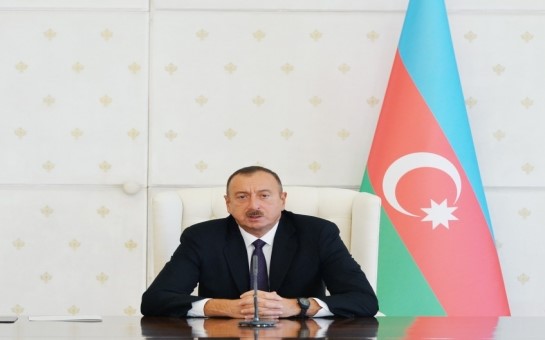 Ilham Aliyev: "The fact that the Games are to be held in Azerbaijan once again demonstrates that Azerbaijan is a country enjoying great respect in the world"

X  X  X
Speech
by the First Lady of Azerbaijan,
the Chairperson of the Organizing Committee, Mehriban Aliyeva

X X X
A member of the Organizing Committee, the Minister of Youth and Sports Azad Rahimov in his speech said:
Dear Mr. President.
Dear Mrs. Mehriban Aliyeva.
Dear attendees of the meeting.
Twenty-four-year history of our independence is rich in many important and strategic events aimed to ensure confident future of the country. Special attention to the development of sport in the early years of our independence became possible due to the wise and far-sighted policy of our national leader Heydar Aliyev. The Great Leader clearly expressed the reason for this attention: "There is no another symbol demonstrating the Azerbaijan's independence but sport".
Dear Mr. President, under your leadership the development of sports is carried out on the basis of consistent logical decisions and events supporting each other, like in all other spheres of the country’s life. As a result, our country gained a high international reputation in the field of sport. The first European Games organized at a high level and the historic victory opened up new prospects for the implementation of major sports events in our country in the future, demonstrated the power and potential of Azerbaijan to the world.
This is good news that hundreds of Azerbaijani young people gained the rich experience during the Games. Cooperation with foreign experts through various training courses, participation in joint projects had a positive impact on the formation of local specialists. We are confident that this potential will be widely used in the country in the course of international sports events.
The material-technical base created on the eve of the first European Games allows holding the IV Islamic Solidarity Games in the available sports facilities. Their level of preparedness fully meets the technical requirements of international federations. These requirements are also applied to the organization of the training process. As there is no significant difference in the number of participants, the issues of accommodation, catering, medical servicing, transportation, security and other technical support to be rendered to athletes, coaches and guests in these competitions will be resolved within the existing opportunities.
Journalists and other media representatives have all the necessary conditions for the accommodation in the Media Village. All the furniture and equipment in the Athletes Village are kept intact and ready for the upcoming event. At the same time, appropriate equipment, internal vehicles and other technical facilities for the kitchens, entertainment centers and outpatient clinics are in working conditions. To ensure the work of the operating personnel, more than 6 thousand different types of IT equipment, computers, scanners, printers, servers and other tools are also fully suitable for re-use.
Dear Mr. President, as it was mentioned by the First Lady of Azerbaijan, Chairperson of the Organizing Committee of the IV Islamic Solidarity Games Mehriban Aliyeva, the sport is not only competition, but at the same time, along with being a major cultural festival, it is a good example of our country’s commitment to the principles of tolerance and multiculturalism. Participation of more than half of the world's countries in the Ist European and the IV Islamic Solidarity Games demonstrates the power and potential of Azerbaijan. At the same time, the presentations made at the preparatory stages and broadcasting the Games create a unique opportunity to demonstrate the beauty of Baku, to promote our historical and cultural heritage.
The Ministry of Youth and Sports paid special attention to the participation of young people as volunteers in the international events held in recent years. The biggest volunteer force has gathered in the time of the European Games. Thousands of young people once again proved their patriotic positions by responsible attitude to the work. A database of these young people has been created to gather them together in the future.
Participation of our athletes in numerous sports competitions is essential for their successful performance in the future. To this end, the organization of the complex competitions comprising a number of sports in the country makes a great contribution to the sports. It also improves the level of athletes’ preparedness for the Olympic Games, ensures the further improvement of their results, creates opportunity for more and more athletes to gain experience.
I would like to note that along with the quarter final competitions of the European Football Championship, the "Formula 1" European Grand Prix races and the Chess Olympiad, the final round of the U-17 European Foorball Championship and the World Championship in Olympic 470 class boat sailing among young people under the age of 23 will be held in Azerbaijan. I would like to note that on November 2-4, the IX General Assembly of the Islamic Solidarity Sports Federation and the first meeting of the coordination committee of the Islamic Solidarity Games for the first time will be held in Baku - outside the traditional place.
Our team has successfully competed in the First European Games and took the second place of honor. We will mobilize all the forces in the Islamic Solidarity Games to justify your and our people’s high confidence in our national team. We are sure that the Azerbaijani people would show a great interest and render support for these Games. Like in the European Games, in the time of competitions the stands will be packed with spectators. We are confident that these Games will be a grand festival of the Islamic countries.
Thank you very much for your attention.