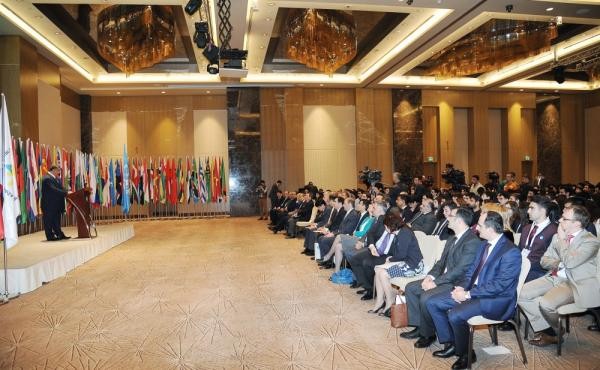 The Conference will last till February 23.
The opening of the First National Model UN Conference in Baku

Today, the First National Model UN Conference started in Baku within the framework of the joint cooperation between the Ministry of Youth and Sports and the UN Development Programme.
The event has been attended by the Azerbaijani Youth and Sports Minister Azad Rahimov, Culture and Tourism Minister Abulfas Garayev, Education Minister Mikayil Jabbarov, UN Development Program Resident Representative Ercan Murat, Ambassador of USA in Azerbaijan Robert Cekuta, a lot of young people and other guests.

Azad Rahimov said that youth is the main force for the future development of Azerbaijan. In this regard, ensuring the active participation of the Azerbaijani youth in decision-making is very important. "One of our biggest priorities is the upbringing of educated and patriotic young people."

Then, the Ministers of Culture and Tourism, Education, as well as the Chairman of the Milli Majlis’s Youth and Sports Committee Fuad Muradov delivered their speeches.
The conference with the participation of 350 young people from more than twenty universities and secondary schools will end on February 23. One of the main goals of the project is the institutionalization of the Model UN (MUN) movement, the establishment of MUN clubs in universities and creation of the MUN network (Model UN Network) uniting them. Model UN is a real-life simulation of the UN General Assembly, the UN Security Council and other UN agencies representing the world of diplomacy and cooperation to the students. In the Model UN, students discuss current issues in the organization's agenda, a draft resolution and a strategy plan are prepared in the interests of mobilizing international cooperation to solve the students’ problems, negotiations with partners and competitors are conducted, and conflicts are resolved.