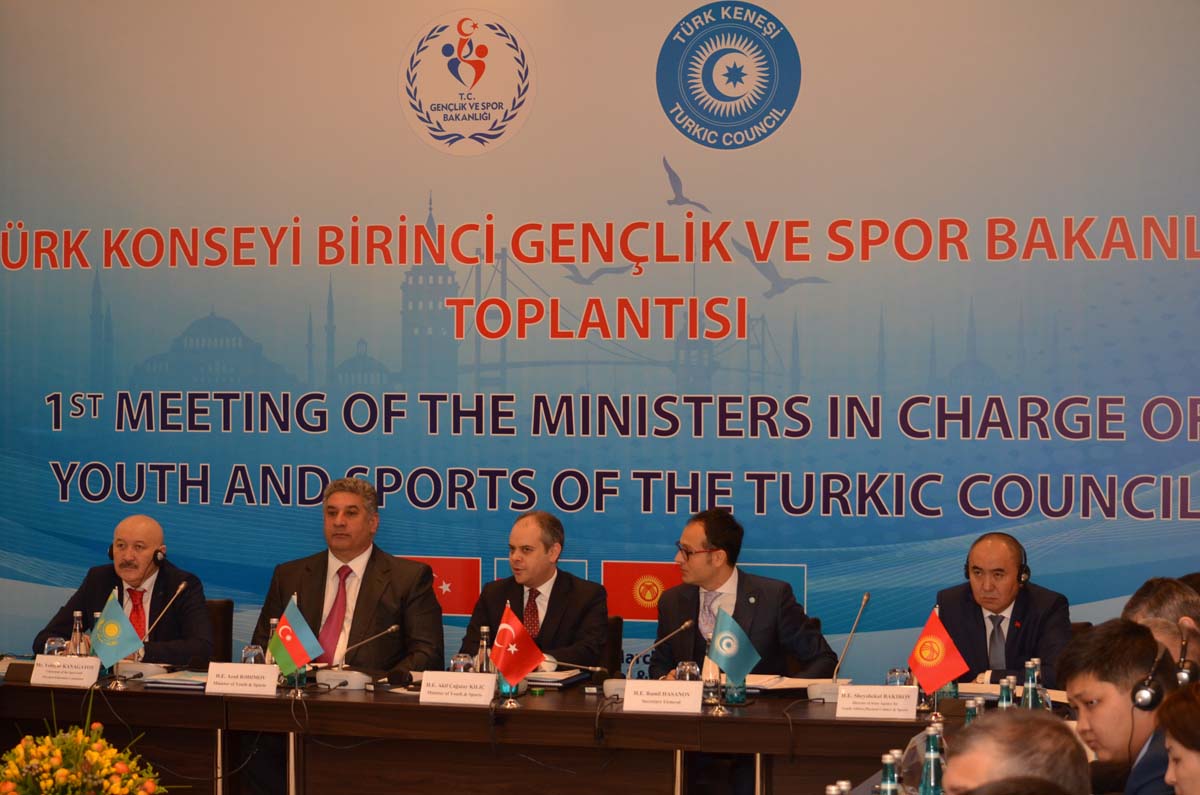 The 1st meeting of Youth and Sports Ministers of Turkic Speaking States Cooperation Council (Turkish Council) was held in Istanbul, Turkey.
According to the Goal.az, the Minister of Youth and Sports Azad Rahimov represents Azerbaijan at the meeting.
Note that the Cooperation Council of Turkic Speaking States (Turkic Council) established within the Nakhchivan Agreement signed at the Summit of the Heads of Turkic-Speaking States between Azerbaijan, Kazakhstan, Kyrgyzstan and Turkey in 2009, is aimed at the development of comprehensive cooperation among Turkic Speaking States and nations through specific projects.
Minister Azad Rahimov in his speech said that the cooperation between the Turkic Council member states has deepened and expressed confidence that in the coming years it will further expand and reach a new level. The Minister recalled that the Turkic-Speaking States Cooperation Council was established at the Summit of the Heads of States held in Nakhchivan - the ancient city of Azerbaijan in 2009, and noted that the two nations were unified by common history, culture and values.
In his speech, the Minister recalled that according to the resolution adopted by the Third Summit of the Heads of States of the Turkish Council held on August 16, 2013 in Gabala city of Azerbaijan, the "Ist Turkic Universiade" and the "Ist Nomad Games" were conducted in our country and said that these Games served to further expansion and deepening the cooperation and friendship among Turkic-speaking states.
Azad Rahimov: "We hope that the preparation for the "2nd Nomad Games" to be held in Kyrgyzstan in September of this yea will be timely and successfully completed. Azerbaijan will participate in these games with a sizeable staff."
Minister Azad Rahimov put forward the proposal to hold the "Youth Festival" of the Turkic-Speaking Countries in Ganja taking into account that in 2016, just this city was elected the European Youth Capital.
Speaking about the events to be held in Azerbaijan in the coming years, Azad Rahimov said: along with the "Youth Festival", we also support the conduction of the "Summer Youth Camp" and the "Youth Council’s" meeting with the participation of representatives of non-governmental youth organizations specified in various articles of the Council protocol in Azerbaijan. Also, I consider appropriate to hold the Turkic Universiade every two years in states set in alphabetical order, and I would like to note that in 2018, we will be able to organize these Games in Azerbaijan."
At the same time, the Minister put forward the proposal to hold the second meeting of the Youth and Sports Ministers of the Turkish Council within the "Fourth Islamic Solidarity Games" in Azerbaijan in May, 2017.