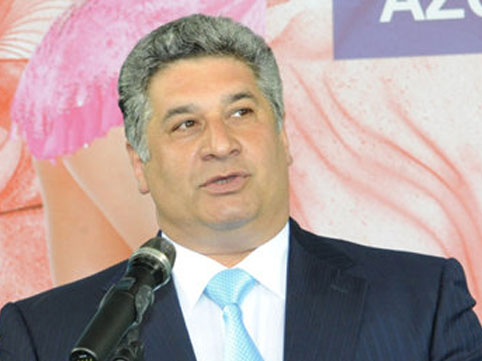 Azad Rahimov: “A healthy lifestyle and involvement of youth and future generations in sports are very important for Azerbaijan”

According to Trend, the Azerbaijani Youth and Sports Minister Azad Rahimov said these words at the ceremony of closing the 21st Rhythmic Gymnastics Azerbaijan Championship held in the National Gymnastics Arena of Baku.
A.Rahimov then welcomed the participants of the tournament on behalf of the National Olympic Committee and the Youth and Sports Ministry and said that thanks to very talented girls who achieved great success and such a grand sports arena which was held the championship of Azerbaijan for the first time, truly wonderful moments were lived through today.

The minister noted that the sports policy which was founded by national leader Heydar Aliyev is successfully continued today by President of Azerbaijan, National Olympic Committee's President Ilham Aliyev. "The material and technical base of our country's sports sphere is developing day by day. Today, Azerbaijan holds the grandiose events. We are very proud to note that in the coming years, the most famous athletes of the world and Europe will perform at sports palaces which are currently being constructed, repaired and opened in Baku. For us, a healthy lifestyle, an involvement of youth and future generations in sports is extremely important".

Rahimov said that this is one of the priorities of the state policy, which is supported by all the representatives of the youth, and all of the country's athletes.

In conclusion, the minister wished the athletes who achieved success in the Azerbaijan championship, high results in Europe and worldwide.

It should be noted that today, Baku hosted the 21st Rhythmic Gymnastics Azerbaijan Championship held in the National Gymnastics Arena.
22 senior and 1999-2001 years old athletes took part in the competitions. The gymnasts competed for the medals in both all-around and separate disciplines.

Along with the gymnasts from the Republican Complex Sports School and the "Baku Flames" club, the athletes from the "Neftchi", Baku Gymnastics School, "Spartak", Shaghan OSC (Olympic Sports Complex) and "Ojag Sport Club” attended the Championship
The Hungary and Kazakhstan gymnasts took part with out-of-competition showings in the tournament and in Baku training camp.
Marina Durunda became the two-time champion of Azerbaijan in the absolute all-around exercises. Lala Yusifova won the silver medal of the Championship. Gulsum Shafizadeh became the owner of the bronze medal.
Milli.Az