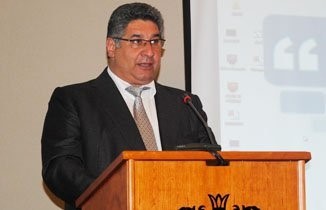 Today, a press conference was held in Baku in association with the European Olympic Games 2015

The Youth and Sports Minister Azad Rahimov and the vice president of the National Olympic Committee Chingiz Huseynzadeh attended the conference. The conference was opened by the minister Azad Rahimov’s speech who evaluated holding the first European Olympic Games 2015 in Baku as a great historical event and spoke about a special bid book of Azerbaijan prepared to win the right to host the games: "By the resolution adopted in Rome two days ago, Azerbaijan won the right to host the European Olympic Games to be held for the first time. This event is totally a victory of Azerbaijan. To achieve this success, we have worked very responsibly. Special bid book has been prepared within the event. In this book, general presentation of Baku was reflected. Information on various hotels, Olympic Complexes and even the Olympic Village was included here."

Then, the minister spoke about the voting for Azerbaijan to host the Games: "Azerbaijan has won this right in the course of secret voting. A total of 48 countries took part in the elections, 38 of them voted for, and 8 countries against Azerbaijan. Only 2 countries abstained from voting."

A. Rahimov who spoke about the new sports facilities to be constructed in connection with hosting the first European Olympic Games by Azerbaijan, said that a large scope of works had been done at as low as practicable expenses: "We will basically try to use the available Olympic sports facilities. New large-scale sports facilities will not be constructed in Baku. Only for beach volleyball special unit will be built, which will operate during the Olympic Games whereupon it will be demounted. Herewith, we will change the Baku infrastructure, improve the transport system."

The minister who emphasized the importance of participation of Azerbaijan as organizer in all sports in these European Games, said that there is enough time to be ready for that: "We have two and a half years, and for this period we have to develop all sports which are or are not popular, as well as not wide-spreaded in Azerbaijan to adequately compete in these games."

In the end of speech, Azad Rahimov said that the European Olympic Games will be held at least in 15 sports not excepting that this figure may increase: "We have appealed to a lot of international federations and the majority of them responded positively. However, we expect more sports federations to join us."