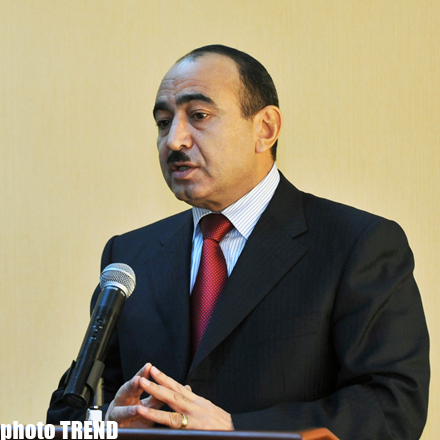 One of the main tasks before Azerbaijani youth in the whole world is to protect the national heritage from Armenian usurpers and to oppose to the Armenian propaganda full of lie and fabrications, the head of Azerbaijani Presidential Administration's department on public-political issues said in his statement made on Saturday at the I World Azerbaijani Youth Congress which is being held in Frankfurt, Germany.

"Azerbaijani young people in the world must be converted to such a significant factor, force which may be taken into consideration in those countries where they live. The more you integrate in public-political environment, society, the more your words have importance in states where you live and study in the more it will have great significance for the dissemination of the fair Azerbaijani country's voice in the world. In this direction you must act in all states together with Turkish Diasporas and make effort to tackle jointly mutual problems. At the same time you, as the young Azerbaijani young people living in various states of the world must know each other very well else you can not tell the world about Azerbaijan. Therefore, it is necessary to take advantage of the chance for the communication which is granted by this event," Hasanov said, and information was disseminated by the press service of the State Committee for Work with Diaspora.
Today, in Frankfurt at the "The Westin Grand" hotel the work of the first World Azerbaijani Youth Congress has been commenced. The event is organized by the Azerbaijani State committee on the work with Diaspora jointly with the national Ministry of sports and youth. This arrangement is being held according to the "State program of Azerbaijani youth" approved by the President of the republic of Azerbaijan.
Hasanov told in detail about the youth policy of Azerbaijani state. He reported that all peoples and states in the world always pursue special policies regarding to youth.
Hasanov recalled that “A state that does not care about the youth has no future” and said that one of the main missions of every state is to prepare the generation which will be able to be trusted and to be passed the baton.

"The main direction of our policy regarding to Diaspora is the work with Azerbaijani youth, of our youth policy - to hold effective and correlated activity with the youth, of our educational policy - to bring up new, healthy, reliable, contemporarily thinking, intellectual, high-level educated youth," Hasanov said and noted that the youth policy composes the fundament of every state.
Mentioning the history of the Azerbaijani youth policy, the head of the department at Presidential Administration reminded that the one of memorable steps made by the Azerbaijani national leader Heydar Aliyev after his return to power in 1993 was the creation of the Ministry of youth and sports in 1994.
"At that time when our public political life came to grief, the national leader foresaw these days, the future of the youth by this step, by the commencement of the youth policy. The national leader formed rightly and successfully the youth policy by the establishment of the healthy state fundament," Hasanov said.
In his appeal to the youth, Hasanov said that the one of the main obligations imposed on them is the familiarization with national and universal values, getting of nice education, acquiring modern values but at the same time - never forgetting national roots.

The 1st World Congress of Azerbaijani Youth will be one of the decent pages of the rich public-political history of Azerbaijan. Youth and Sports Minister Azad Rahimov said about that in his speech at the Congress.

"I believe that everyone who was lucky to attend this historic event, will feel a sense of pride in whole life and will be properly understand the responsibility which rests on them in our modern history," said the minister.
The minister noted that being deprived of its independence several times, the Azerbaijani people have now become the owner of its destiny. He stressed that the Azerbaijani state is developing based on strong foundations that were created as a result of the authority, militancy, determination and strong will of National Leader Heydar Aliyev.
Rahimov also spoke about the work done in the field of youth policy in Azerbaijan."Over the past five years, the government has allocated funds amounting to 3.8 million manats to support more than 350 projects of youth organizations. Youth representation in government agencies and elected agencies in the country increases every year. Currently, approximately 30 percent of municipality members are youth, of whom 326 are chairmen of municipalities," said the minister.
Rahimov also reported on the activities of diasporas of Azerbaijani youth abroad.
"Over recent years, the Azerbaijani youth, who study abroad, have strengthened in the sphere of diaspora and lobbying. In this case, the special role belongs to the State Program for Education of Azerbaijani Youth Abroad in 2007-2015 signed by the President of Azerbaijan Ilham Aliyev. Within the program, every year Azerbaijani young people are sent to study at prestigious universities in different countries. This program creates new opportunities to strengthen the future of intellectual potential of the country, the participation of youth in science and business, as well as in the culture of our country," he said.

According to him, such conditions make it necessary to direct the energy of youth towards productive direction and the formation of intercultural dialogue.
"The correct application of the knowledge and skills is also an important issue. In some countries, non-governmental youth organizations are established to unite young Azerbaijanis living and getting education abroad. Among them, I particularly note the activities of the Azerbaijani Youth Organization in Russia. This organization, chaired by the Head of the Heydar Aliyev Foundation's representation in Russia, Leyla Aliyeva, turned into a single platform that combines youth clubs and voluntary groups operating in Russia. The projects realized by the organization are aimed at promoting the Azerbaijani cultural heritage and its reality in Russia and strengthening the ties between young people of both countries. Over the past several years, forums of young Azerbaijanis studying in Germany, France, Greece, Austria, Belgium, Britain and other countries have been conducted. The forums were attended by parliamentarians, politicians and businessmen in these countries. In addition, traditionally the forms of Azerbaijani youth studying abroad are conducted during summer vacation every year. Eight forums have already been held, and in August this year, an organization was established under name "International Forum of Azerbaijani students getting education and becoming graduate abroad," said the minister.

On behalf of the chairperson of Azerbaijani Youth Organization of Russia (AMOP) Leyla Aliyeva the executive director of this organization Emin Hajiyev read her letter addressed to the Ist Congress. In this letter, the chairperson of Azerbaijani Youth Organization of Russia Leyla Aliyeva  says:
"Dear friends! Today, you participate in an important event – the Ist World Azerbaijani Youth Congress. This Forum is important as it is the first event when representatives of Azerbaijani youth who are living abroad, in Europe, America, on different continents and in various countries will feel moral unity, get an opportunity to make acquaintances with people making efforts zealously to achieve mutual goals. All Azerbaijanis are united by the love to their Motherland regardless of their residence.
The Ist World Azerbaijani Youth Congress held in Frankfurt is not also good ground for the establishment of friendly and business links among Azerbaijanis but also a unique, rare chance for the strengthening connections with Motherland, reinforcement of the young people's socio-political activity. Besides, the Congress is creating the conditions for the attraction of new forces in order to form and reinforce links within Azerbaijani Diaspora functioning throughout the world. Attachment of the big significance to this work by Azerbaijani state is very important support for us. This proves once more that we are standing on the right way and moving successfully on it.
The Azerbaijani Youth Organization of Russia has been already functioning for two years and all this time it endeavored to support the initiatives of the young Azerbaijanis to wide extent. During the previous years AMOP widened significantly the geography of its business. Today our departments are functioning near in all regions of Russian Federation. All our arrangements are oriented to the consolidation of our youth. We help them to get education, support the dissemination of healthy lifestyle, of the rise of attention towards cultural and historical values; we promote their desires to study mother tongue, literature and national traditions. These are all very important. The participation of the several hundreds of young people representing a number of countries of the world in the Congress is proving once more the importance of communication of Azerbaijani youth with their peers. I am sure that all participants of the meeting are talented, perfect, bright and creative people. You all are making efforts in order to get higher education of high quality in prestigious universities of the world. You all are having the serious goal and don't abandon to achieve it. This means that you are the trust and basis of the future Azerbaijan. Your future is the future of our country. I am confident that the establishment of the World Association of Azerbaijani Youth within the youth congress, which participants we are, will be the next and very important step on the way of the strengthening of our youth Diaspora. Great tasks are waiting us ahead on this way. I wish new successes to you and new achievements to the work of the congress!".

The Congress was organized jointly by the State Committee for Work with Diaspora and the Ministry of Youth and Sports. The event is held in accordance with the "Azerbaijani Youth State Program" approved by the President of the Republic of Azerbaijan. Of the state and government officials, the forum is attended by the Head of the Socio-Public Department of the Azerbaijani Presidential Administration Ali Hasanov, Head of the State Committee for Diaspora Nazim Ibrahimov, Youth and Sports Minister Azad Rahimov, Deputy Head of the Cabinet of Ministers Department on Science, Culture, Education and Social Issues Gurban Amirov, the Azerbaijani Ambassador to Germany Parviz Shahbazov, the head of the Azerbaijani permanent mission to the Council of Europe, Ambassador Arif Mammadov, Azerbaijani Ambassador to the Netherlands, Fuad Isgandarov, the Azerbaijani Ambassador to Switzerland Murad Najafbayli, General Secretary of the Youth Forum of the Organization of the Islamic Conference Elshad Isgandarov , Secretary General of the Turkic Parliamentary Assembly organization Ramil Hasanov, the Consul General of Turkey in Frankfurt Ishan Saygili, founding rector of the Middle East University of Northern Cyprus Suat Gunsel, Director of the Information Institute of the National Academy of Sciences of Azerbaijan, correspondent member of NASA Rasim Aliguliyev and other guests. In total, the event brings together representatives of 41 youth organizations from Azerbaijan, 131 youth organizations from 23 countries, the heads of 41 diaspora organizations from 25 countries.
At the meeting of Azerbaijani Youth Organization of Russia (AMOR), managed to do a great job in a short period of its activity, is represented by a delegation of 23 persons.
The organization of the I World Azerbaijani Youth Congress is aimed at the involvement of the Azerbaijani youth living abroad in building the Diaspora, expansion of their socio-political activity, strengthening ties with their historical homeland.
After reading the appeal by the Head of the Azerbaijan Youth Organization of Russia Leyla Aliyeva, congratulatory speeches were made and views were expressed about the importance of the Congress by the General Secretary of the Turkic Parliamentary Assembly organization Ramil Hasanov, Secretary General of the OIC Youth Forum Elshad Isgandarov, Turkish Consul General in Frankfurt, Ishan Saygili, Azerbaijani Ambassador to Germany Parviz Shahbazov.