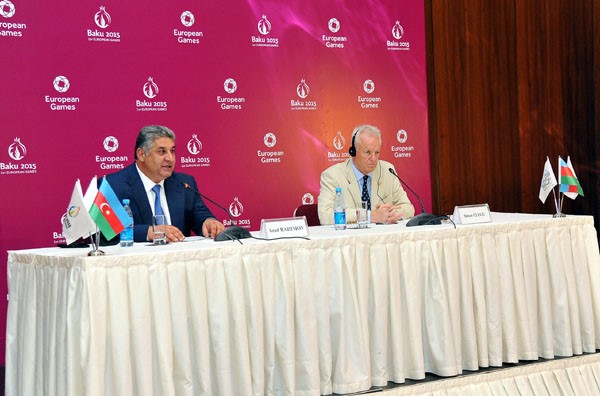 Azad Rahimov: Azerbaijan has written its name in golden letters in the history of the world sport

Hosting  the "Baku-2015" first European Games at a high level, Azerbaijan has written its name in golden letters in the history of the world sport.
According to AZERTAJ, Youth and Sports Minister Azad Rahimov said these words at the press conference on the results of the "Baku-2015" first European Games held on June 29.
Azad Rahimov mentioned the great attention paid by both local and international media to the "Baku-2015" first European Games and emphasized that the world, indeed, got an idea of the richness of this ancient Land of Fire. The minister said that the Azerbaijani athletes won a total of 56 medals, including 21 gold medals in the first European Games, and wrote the name of our country in golden letters in the history of the world sport. As it was noted, our athletes completely justified the forecasts with regard to their performance. Our indices are very high. Today, President Ilham Aliyev congratulated all the athletes, their coaches and people involved in the organization of the Games, and presented prestigeous awards. President Ilham Aliyev highly evaluated their work. The main award - the "Heydar Aliyev" Order was granted to the chairperson of the Organizing Committee deeply engaged in the Games-related issues, the First Lady Mehriban Aliyeva. I congratulate the First Lady of Azerbaijan Mehriban Aliyeva on behalf of the sports community, our people. The European family, all sports federations have lived through this holiday together with us. Our athletes almost every day pleased our people with their victories. I would like to express my deep gratitude to the President of the European Olympic Committee, Mr. Patrick Hickey. We have justified the trust. The holiday ends today. Azerbaijan will often host great and solemn holidays. Our people are worthy of victory.
The Minister noted that in general, the Games were broadcasted in 145 countries around the world. "Baku-2015" was one of the most shared 5 surveys in "Twitter". A total of 17 thousand young volunteers were involved in the Games. The number of volunteers from foreign countries was more than enough. 1,000 hours of broadcasting were conducted by the International Broadcasting Company. All these achievements once again demonstrated the responsible attitude of Azerbaijan to any issue.
Chief Operating Officer of the "Baku-2015" first European Games Operations Committee Simon Clegg who was granted with one of the Azerbaijan's highest awards – the "Order of Friendship" by the order of President Ilham Aliyev, expressed his pride with this regard. Simon Clegg once again expressed his admiration with this step of the country's leadership and their active support in organizing and conducting the Games, and noted that about 2,500 local and foreign specialists and people with different backgrounds worked diligently in the ranks of the Operations Committee to hold this prestigious sporting holiday at a high level. Simon Clegg emphasized that the Azerbaijani employees and volunteers involved in the organization of the Games gained rich experience to hold any event in the future: "I express my gratitude to sponsors, partners and press. European Games turned to be a great achievement. As a result of the support of more than 12,500 volunteers the first European Games became the history. Every day, these young people did their best to glorify the name of Azerbaijan. The opening ceremony was a unique achievement. I congratulate our Azerbaijani members with this achievement. The work of the national sports federations was great. We have tried to contribute to the implementation of the policy "to turn the black gold into the human capital" being one of the main principles in President Ilham Aliyev’s activity. We are proud to have rendered support for these Games."