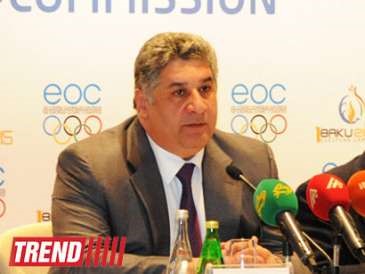 “In current times, young scientists have wider opportunities compared to the previous 5-10 years,” – the Youth and Sports Minister Azad Rahimov said at the Baku World Forum of Young Scientists on the theme of "New challenges of the world science: Young scientists' joint approaches" which started in Baku today, according to Trend.
The minister said: "Today, you are only a "click" away from the latest innovations and the most advanced researches. The prestigious science prize winners, world-renowned scientists, authors of outstanding scientific studies are not unapproachable today. Nowadays, any person and any information can be found."
A.Rahimov said that the support rendered to the development of science in the world countries is increasing day by day. In different countries young scientists and researchers create local organizations and associations which successfully operate: "It can be seen more clearly on the example of Azerbaijan. Today, the science is developing at the new stage. In 2009, President Ilham Aliyev signed the "Strategy for the Development of Science in Azerbaijan."
According to A.Rahimov, the ministry under his leadership plays an active role in the popularization of science among young people. The minister noted that the main goal is to increase the young people's interest in science: "We believe that the Baku Forum participants will be able to awake the future generations’ interest in this field, to start the ball rolling. The main purpose of the world forum is to bring together young scientists from around the world and to create a labor union between the representatives of different countries and areas, as well as to support the available networks of young scientists. The forum is expected to accelerate the integration of the Azerbaijani researchers and scientists into the world science and to contribute to the work of available networks of scientists."
It should be noted that the two-day forum was organized by the Ministry of Youth and Sports of the Republic of Azerbaijan, the Azerbaijan National Academy of Sciences, the Azerbaijan National Commission for UNESCO, the "EURODOC" Council of Young European Researchers, and the Azerbaijan Sociaty of Young Scientists, Postgraduates and Masters.
At the opening ceremony the head of the Presidential Administration’s Humanitarian Policy Department Fatma Abdullazadeh read the President Ilham Aliyev’s congratulatory letter to the participants of the Baku World Forum of Young Scientists.
Contact address of the article author: agency@trend.az